Construction of the McCook Memorial Auditorium was completed in 1939 and was the accomplishment of a long-cherished goal of the citizens of McCook. The first efforts in building the auditorium failed in the 1890s and, periodically, the matter was brought up but, for various reasons did not materialize. The auditorium was finally completed in 1939 and dedicated as a memorial to veterans of all wars.

The land, which was 300 feet square, was purchased from John E Kelley for $1,000. Chris Hansen Post No. 203, American Legion donated $960 for purchase of the land. Later the council deemed that more land was necessary, and purchased it from Kelley as well. The purchase increased the size to 300 feet by 355 feet. Part of the auditorium, at that time, was out of the city, so the council created the Auditorium Addition to the city. The architectural firm, McGennis and Schaumberg of Lincoln was awarded the design of the project.

The auditorium is available to rent for your special event on a first-come-first-serve basis. For fees and other information, you may review the auditorium rental contract. For availability, see the events calendar. For other details, please contact the City Offices. 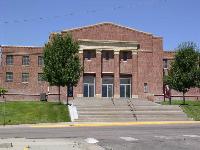